The tickets looked normal enough – except for the inscription “Broomsticks at 1.00 a.m.”, but, on arrival at the venue at the Irish World Heritage Centre, numerous white chandeliers, complete with gold-coloured candle flames, were hovering silently, eerily; tables were adorned with centrepieces, each artistically created from a broomstick, small cauldron, black furry spider, winged ball in full flight and a large goblet from which “flames” spewed. Perhaps not so normal – in fact positively spooky, which was confirmed by the announcement that President “Barrie Potter” was about to arrive at Platform 9 ¾ on the Magiwarts Express. A billowing burst of smoke, and the Toastmaster’s voice was drowned by the sounds of a huge steam engine, seemingly being driven into the hall, heralding dramatically the entry of Barrie Horridge and his guests.

Accompanied by his Lady – correction, his 2 Ladies, Shelley and the diminutive Annabella, both exquisitely clad in claret satin and identically coiffed – Barrie led his guests around the room, towards the top table, to the lively rendition of “Chattanooga Choo Choo” and enthusiastic applause.

The guest of honour, John Pye, Secretary to the British Ring IBM, who was accompanied by his wife, Carol, proposed a warm toast to the Order of the Magi, reminiscing about the history of the society, including his own personal connections with it, and touching on previous meeting venues, such as the one located long ago in a less salubrious part of Manchester, where protection money to “guard” your car had to be paid to small boys!

The President, having donned the appropriate round glasses, provided a delightfully humorous response in his own inimitable way. Barrie also invited everyone to open their presents (the label on each bearing the request that we wait until this point). Following his instructions, we all pulled out a tiny rubber-banded object, removed the band and threw the object into the air. A myriad magic wands materialised from nowhere – we all felt like true sorcerers’ apprentices! 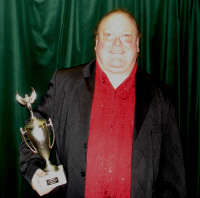 Order of the Magi – Member of the Year – Alan Russell

Presentations followed, including the annual Member of the Year Award to Alan “Snaggers” Russell (the balloon artist, who had created the amazing chandeliers), to Secretary, Mike Sharples, in recognition of the enormous amount of work he’d put into the society over the past year and a special presentation to Honorary Member, Donald Bevan, marking his retirement as editor of Abracadabra. The latter was accepted, on Donald’s behalf, by Elizabeth Warlock, who was extremely welcome at the dinner, together with Michael Gancia. Elizabeth, having said a few words of her own, read out a letter of thanks from Donald.Elizabeth Warlock receives the special presentation from President Barrie Horridge 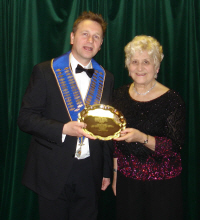 Nick Barnes, President Elect, proposed the toast to the ladies and guests, with an extremely well received short, but witty response by Shelley Horridge, more in the nature of a spontaneously cosy chat with the guests, than a formal speech, and with the involvement of mini-lady, Annabella, plus a gift for her Daddy.

The Toastmaster, no other than He-Who-Must-Be-Obeyed (alias Geoffrey Newton), resplendent in scarlet tails, auctioned “Old Mr. Wizzy”, a large marionette puppet, which, from his perch on a wheeled stand, had been giving us funny looks all evening!

The cabaret was a fabulous cocktail of comedy, juggling, music and, of course, magic. The compere, “Tom Jones” (alias Ian Anthony) interspersed the acts with the familiar songs, belted out lustily, as he gyrated across the front of the stage.

He initially introduced High Jinx, the magical performance of a young brother/sister who totally delighted the audience with their comic interplay.

Next came the truly welcome return to the Magi of Michael Pearse, both a highly skilled juggler and a comedian. It was totally riveting, trying to concentrate on Michael’s intricate balancing skills, using everyday items such as golf clubs or a tabletop laid out with a tea service, whilst catching every word of the non-stop flow of such a humorous raconteur.

Finally, came more comedy by John Archer, who thoroughly mystified his audience with his mental magic, coupled with fun and jokes, a refreshing change from most mentalists who tend create an electric atmosphere of intense drama.

“Tom Jones” produced a final burst of songs, including a particularly robust “Delilah” (we all joined in), before taking over the disco. The younger element, with excess energy to spare, danced into the early hours, until we all took off into the night on our broomsticks.