Alright lets be honest, I thought I would much rather be curled up on the sofa watching Eastenders and munching my favourite chocolates, but I am so pleased that I visited the Huddersfield Circle of Magicians. Gentlemen of The Magi – you are such a talented bunch. You had me enthralled and at the edge of my seat all evening and you should be so proud of yourselves. 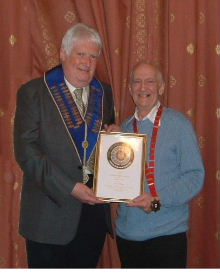 Firstly the Yorkshire hospitality was warm and welcoming and all Magi members and spouses were treated to a drink on arrival. Proceedings were off to a good start with Peter Moran presenting Huddersfield President, Barry Senior with a framed Magi logo. MC for the evening was Ian Ball whose quick witted repartee seamlessly interlinked the Performers.

Now in order of performance – Mike Sharples kicked off with a skilled display of cards which amazingly turned from blank white to a fully printed deck, followed by a very witty story about a man who was singled out in a Village for being a liar. This man was likened to a card which suddenly shrank in size and then finally disappeared. Mike also held a haunted key in his palm which mysteriously twisted and turned itself around – frighteningly spooky.

Brian Berry followed with some very funny and skilled routines with sponge balls which kept multiplying themselves in Joan Senior’s hands and then a coin which magically grew in size. His rubber band routine of a band passing itself unbelievably through another band was superb. He ended with a plastic cups routine which covered paper balls which in turn transformed themselves into tangerines.

Nick Barnes commenced his routine with a witty assortment of his favourite cards which was especially clever when Joan Senior’s choice of favourite card turned out to be like herself a lady wearing glasses. Nick said he couldn’t afford linking rings and instead ingeniously performed the trick with three pieces of coloured rope, which ended up being thrown out to the audience for close inspection. Nick finished with a very clever routine with boxes of matches which kept opening and closing apparently by themselves. More from Nick later.

Clyde Harbottle executed an impressive act with three tubes within which a glass jumped from tube to tube. It was definitely in the middle and then without warning jumped to another tube. Then an entertaining performance with the Angels ticket to heaven or hell, being ripped into half and the pieces magically spelling out ‘hell’ and turning themselves into a ‘cross’.

Martin Allcock opened with a balloon which he blew and blew and blew and which popped to reveal a bottle of wine. Then an amusing study on the different types of shuffles with Martin demonstrating the cow pat shuffle, Russian shuffle, Scottish shuffle and so on. His audience participant, Dominic wrote his name on the edge of a chosen card – and by a click of the fingers Martin magically controlled this card to journey throughout the pack – to the top, to the middle and to the bottom and eventually ending up stuck to Martin’s head. I don’t think I would like to gamble with Martin, a gentleman with such a power over cards.

Hilarious Philip Partridge took us to the interval with a brilliant routine involving a pothole which moved from one card to another. Philip’s quirky act was interspersed with non-stop amusing remarks and I wish there had been time to see more of him.

A gentleman close to my heart opened the next part. Peter Moran involved two members of the audience in an impressive Prediction routine. The lady chose a card and promptly sat on it, whilst Peter helped the other participant to predict the same card. Then, and I have to chuckle to myself here, Peter used this lady, the one person out of the whole room with whiplash, to take part in a solid block through head routine. This poor lady had to bend her neck sharply to one side whilst Peter passed the solid block from one side to another. Anyway the poor lady’s neck survived and the block travelled neatly through her head.

Next Geoff Newton with magic of the mind. Four pictures of ladies for a lad to choose his girl – girl chosen and a set of keys magically had the chosen lady’s name written on the fob. There followed an amazing sequence where the participant freely with the aid of some dice chose a word on a page out of a book. This was an absolute free choice but Geoff was scarily accurate and able to mind read the exact word. Finalising with a pack of cards shuffled between three people who came up with a Postcode – not just any Postcode but Geoff’s postcode. Weird and wonderful.

John ‘Sly’ Smith next with a beautiful start of four coloured pieces of tissue paper which magically turned themselves into an exquisite garland of flowers. Then followed an entertaining routine with three envelopes, two containing lots of money. John’s audience member Kay had a free choice, but she was never able to pick the envelopes containing money. Then Merlin’s boxes which although appearing empty kept producing large amount of objects – just how did this all fit in!

Mike Sharples returned with an amusing presentation to Barry Senior of something which he got off the back of a lorry – a Long Vehicle sign! Then some gentle gibes on the village of Keighley and how far it is behind the times. He demonstrated Keighley’s latest form of mobile communication – tin cans joined together with string – very funny. Then Mike chose a lady from the audience to place her arm into a contraption filled with balloons, through which he proceeded to pass a long sharp knife. For a moment I thought our visit to Huddersfield would be cut short, but needless to say she survived without a blemish.

Ian Ball, our proficient MC then brought a bit of culture to Huddersfield with a poem about three cards – two Queens and a King (Kate & Edith). Ian displayed his dexterity with the King disappearing and reappearing in front of your very eyes. I loved the poem which was performed brilliantly and involved Ian nearly, but not quite, saying some very naughty rhyming verse. (Helen – it was of course all in the best possible taste!)

Then Nick Barnes returned with his cardboard box and curtain of mystery and with the help of his Band of faithful musicians levitated before your very eyes. An appropriate and super end to a magical evening.

The Magi then lined up and awarded the audience ten out of ten and promptly turned their voting cards round to spell out ABRACADABRA. The Huddersfield Circle of Magicians reciprocates this visit by attending The Order of the Magi on Tuesday May 24th and I am sure this will be a splendid evening. (This is an ‘Open Night’ so you don’t have to be a Magi member to attend.)

(I decided to put this up in it’s entirety, especially as it says such good things about me. Besides it saves me trying to edit it down and Helen had obviously put a lot of effort into this, thanks Helen – webmaster.)