The intended subtitle for this report had been ‘Bird’s-Eye-View’, until He Who Must Be Obeyed (Geoffrey Newton), considered the non-p.c. connotations, especially in a society with only 1% female membership, inappropriate, no matter how tongue-in-cheek.

The long-established NWDD has now reached its third year in the enthusiastic and capable hands of the Order of the Magi. Held for the last two consecutive years at Barnton, Cheshire, this annual event has now been relocated to the Magi’s own Manchester headquarters, the Irish World Heritage Centre (IWHC). The relocation gave me the immediate benefit of being spared a lengthy journey at mist-shrouded dawn, deep into the Cheshire countryside! 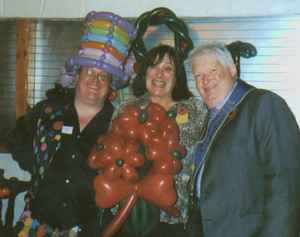 Helen Moran, Nicky Sharples and I had been detailed to organize the reception table. From this vantagepoint, we noticed the steady flow of visitors, from before opening time, well into the afternoon. Many participants, especially those accompanied by their families, took advantage of the recently-opened retail park next door to the IWHC, no doubt to do some Christmas shopping.

The new venue proved ideal. The main hall, complete with stage, was well-proportioned for the purpose, abundant food flowed from the premises’ own kitchen and the bar “buzzed”. I can personally confirm that it was nice and warm, essential for a chilly November day.

The dealers’ stands, all well presented, attracted much attention and, throughout the event, an eye-catching compilation of images and dealers’ information, interspersed with Magi material, appeared on a huge screen. The production was the superb work of Dan and Rebecca, son & daughter of Mike Sharples, The Magi’s past-President. 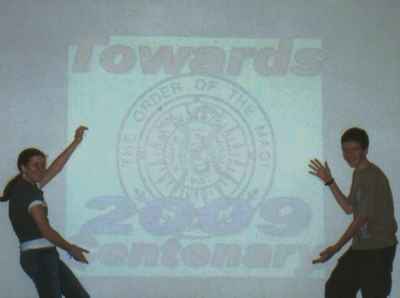 Dan and Rebecca show off their handywork.

Trevor Lewis wittily informed and entertained with his lecture on children’s magic, cabaret and close-up. Following the production of water from a disembodied tap, Trevor demonstrated a cards-across routine, thanking the young assistants with gigantic bank notes. The classic effect professor’s nightmare was then performed in a way to reinforce a road safety slogan for children and then as a play on golfing terms. A continually elongating gag-bag then appeared, inside which a blue silk became a red & white striped sock and then a union flag.

Whilst table-hopping, a nudist deck can acquire colour and pips from a card-decorated tie. He then demonstrated a broke & restored gypsy thread and a find the lady routine using jumbo cards, described as a Monte-Plus. The lecture closed with 3 of Trevor’s methods to force a card, second dealing, a very simple card-to-wallet, egg-bag routine and a particularly effective version of the 6-card repeat. All of these were explained with some original thoughts on presentation and patter. (I hope that I’ve learned the correct terminology!)

Steve Dela, Young Magician of the Year, appeared later on, providing a beautifully constructed silent performance to music. Various objects appeared, disappeared and then transformed. Multiple card fans were deftly produced, an egg extracted from Steve’s shoe was cracked over a bowl and following a linking rings routine, Steve demonstrated his juggling skills with huge coins with the dramatic finale a card fountain. The kaleidoscope of themed colours had provided a stunning visual feast.

The NWDD has evolved into an event way beyond a magical trade fair. It proved to be a convivial, vibrant social gathering of magicians from far and wide, many with their families and numerous expressions of enjoyment and satisfaction were received.

Some of the Magi NWDD Team put their Backs into it.

Well done to all those involved. Everyone contributed to the success of the occasion, dealers, performers, the hard-working Magi team and last, but not least, all the many visitors.

See you next year!

(Thanks for the report Vivien, and thankyou to you, Nikki and Helen for looking after the door for us – webmaster.)