by Geoffrey Newton, Public Relations Officer
An event like this, which of course only happens every one hundred years, has to be something special and it certainly was. “Team-Magi” certainly pulled out all the stops to make this a most memorable occasion. Please remember though it is not just the people you see that make the whole thing tick, it’s also those you don’t see. So spare more than a thought for the sound, lighting, stage management, photographer, etc.

Following my appearance on Channel M Breakfast TV show on the Wednesday morning, I arranged for them to cover our event in the evening. Unfortunately, those of you who were unable to attend missed the opportunity to be featured on television. I hope their programme report gave a flavour of our party, but if you missed that too I trust my words here will give an overview.

The evening was in the form of a show with added extras. Let’s look at what we saw. Before curtain up and during the interval Barrie Horridge ran The Bunco Booth, which he has honed to a fine art. 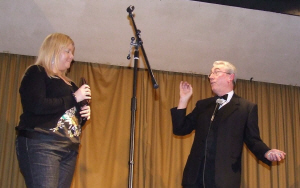 Opening the stage performances was Brian Sefton with his patter act, one not normally seen, as we tend to associate him with his doves. He featured torn & restored newspaper, card in bottle, cards across, and the three card trick using four cards. A really polished performance which Brian is always known for.

Opening the stage performances was Brian Sefton with his patter act, one not normally seen, as we tend to associate him with his doves. He featured torn & restored newspaper, card in bottle, cards across, and the three card trick using four cards. A really polished performance which Brian is always known for. 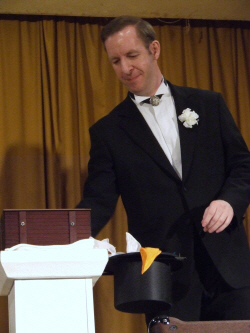 Next up; Stuart Brown from Derby with a silent manipulation act with canes, silks, enlarging and diminishing cards and his feature effect, what I call the pranky hank – but big time! His presentation on this is the best I’ve ever seen.

Closing the first half was the skilful vocal talents of Gerry Ball (wife of your now President). Her choice of titles was greatly appreciated and delivered in a most refreshing style. Finishing on “Happy Birthday” the old president (that’s me!) cut the cake. Thank you Gerry, not only for a splendid performance but also giving me the link.

During the interval a genuine Sooty, used on the stage shows by Harry Corbett, was auctioned and raised £65 for society funds. 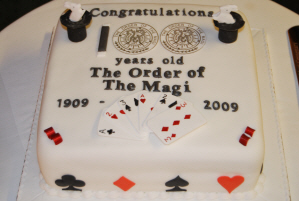 As the cake was being cut glasses of ‘champagne’ were delivered to everyone, bang on cue by the Irish Centre staff. 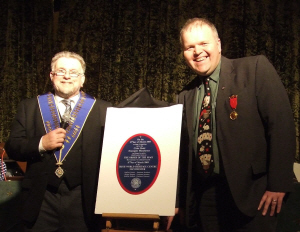 The Centenary Plaque was unveiled and the raffle drawn, then it was on again with the show. 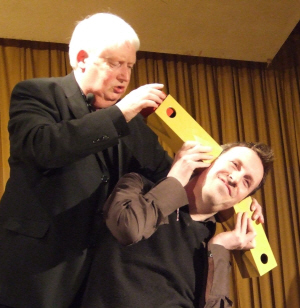 Opening, was one of our members, Peter Moran. Now I may be a little biased since he has been a friend of mine for over 40 years, but his handling of the Axtell frame and his friend Skully, and the Seabrook note in wallet has been honed to perfection. Well done Peter, comedy all the way! 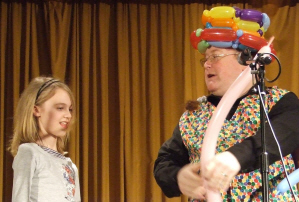 Another of our own, next was Snaggers (Alan Russell) and his plethora of balloons. From a single flower to a massive bouquet. From a ‘Honda 50’ to a ‘Harley Davidson’ – is there nothing this man cannot make? He had very professional handling of assistants and enough one-liners to write a book. Big effort there so big thanks. 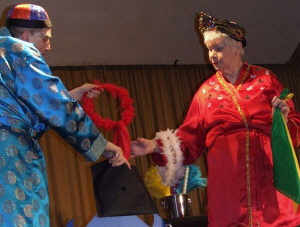 Finally came the Chinese act of Ying and Yang (Clive Moore and Jean Ellison – also from Derby) filling the stage with silks, flowers, and parasols. A wonderful act and colourful display. 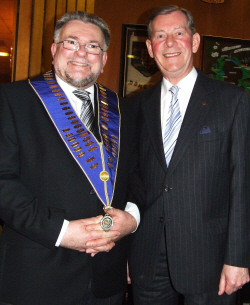 Anchor man throughout the evening was John Pye, who kept the pace flowing between acts. John is very experienced in this sort of thing, and it showed. With good diction and good timing I could ask for no more.

As is often said, all good things must come to an end, and as the party poppers popped we all wended our way home with fond memories of this milestone of Magic in Manchester.

A number of magicians appeared the following morning on Channel M Breakfast TV news, as well as on evening news programmes.

Finally back to the ‘invisible people’ who were:- stage managers Paul Warren and Paul White, sound Ian Ball, photographer Rebecca Sharples, and our ladies team Nikki, Helen and Vivien. Thank you all.