Few professional magicians in the U.K. can deny that they have heard of “The Supreme Magic Company”. It is doubtful there are more than a handful of those who grew up reading the company magazine “The Magigram” or carefully reading through the thousands of effects for sale in their extensive catalogues, that haven’t heard of Edwin Hooper – founder of The Supreme Magic Company, and inventor of many tricks.

One of Edwin and Supreme’s most iconic magical effects had to be “The Rainbow House”. There couldn’t have been many Children’s Entertainers who didn’t own, or long to own this fantastic “mini-illusion”.

For those who don’t know the trick, whilst presentations would vary, the effect went along these lines. The performer would display a large model of a white house with black line details. A sort of 3D version of the illustrations found in colouring books.

This would then be placed inside a square tube bearing a colourful rainbow motif. Then the magician would use his favourite colouring routine by-play. Perhaps using a number of coloured silks which when placed into a bag would magically turn white, or one of the various other colour effects sold by Supreme.

Eventually the tube would be lifted to reveal that the model house was now brightly painted!

If this wasn’t magical enough, it was then time to find out who lived in such a small house. On lifting the house, a live rabbit would be shown to have appeared!

All in all it was a fantastic effect, and a great show closer for many magicians around the country. But why are we sharing this today?

It has come to light recently that Edwin Hooper first discussed his ideas for The Rainbow House at a magic lecture in Manchester for Order of The Magi in 1984, as mentioned in this website’s text. I wonder if on that evening, 35 years ago, he (or any of the magicians who attended) had any idea how popular and iconic the trick would become? 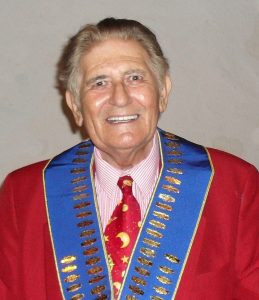 The late and much respected Past President Joe Abrahams

Thanks to all of you who were able to attend last night’s Magic Auction. Whether you were buyers, sellers or runners your participation was greatly appreciated. We received a good figure from the sale of Joe Abraham’s estate which will enable us to purchase a new trophy for the stage competition – “The Joe Abrahams Trophy” to be held later this year. Will you be the first to receive it? You’ve got to be in to win.

Joe was a very active member of the society, Treasurer and Past President, and it seems only fitting that the funds raised from the sale of his magical estate, kindly donated by his family, are used to purchase a new trophy, to remember him by.

We hope to see you all at Geoff Newton’s ‘Key Ring’ lecture on Tuesday 23rd May.

Finally if you are a society member and have not yet let Mike have your mobile number please do so in order that we can send text alerts to announce meetings, new etc.